The State of Virginia comprehensive DUI program, Virginia Alcohol Safety Action Program (VASAP), provides a variety of services and referrals for DUI offenders. Individuals entering the program are evaluated and classified as needing Education, Intensive Education or Treatment. The Change Companies® has provided curricula for both levels of education since 1995. The treatment component is conducted by a state approved facility or provider. To examine the effectiveness of the program, a random sample of 1,085 VASAP clients referred for services between 1997 and 2000 was selected for analysis of recidivism. As VASAP is a full-coverage program, it was not possible to select a control group.

Recidivism was defined as any conviction for a subsequent drug or alcohol-related moving violation offense. For DUI recidivism, the overall rate for VASAP services was 11.2 percent in comparison to the national average of 19 percent (Wells-Parker et al, 1995). The rates by service were 8.8 percent for Education, 9.6 percent for Intensive Education and 14.3 percent for Treatment. 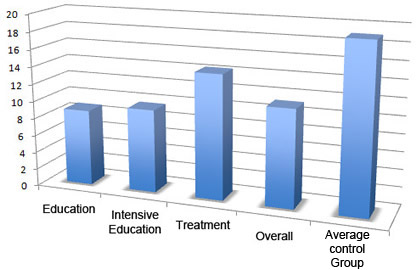 Wells-Parker et al's (1995) meta-analysis reported an expected 7-9 percent reduction in recidivism from a remedial intervention of this nature. Using this figure and data reported by several other states and studies, the authors conclude that

"VASAP appears to be at least as effective as their counterparts in other states (and regions) - and in some cases more effective in reducing DUI recidivism."

"While it is not possible to make a definitive determination of their effectiveness because we do not have a comparable control population, the lower level of recidivism would seem to provide ample evidence of its effectiveness."